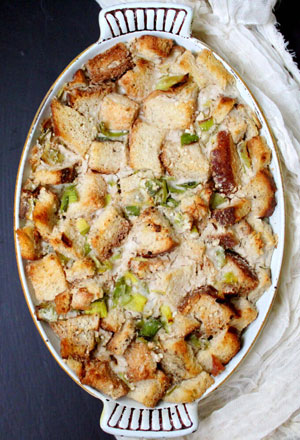 Leek Bread Pudding. I can’t eat Leeks without thinking of Shakespeare (I know, right? I am a horrible dinner guest). It’s true, years ago, I appeared in a production of Henry V.

In it, Fluellen is taunted by Pistol for wearing a leek in his cap (the Welsh wore Leeks as an “honorable badge of the service”). “Hence,” says Pistol, “I am qualmish at the smell of leek.” At which point Fluellen forces Pistol to eat the leek “If you can mock a leek, you can eat a leek!” Honestly, it’s funnier than it sounds.

Leeks are underused in the States. They’ve got a lovely understated onion flavor and go wonderfully in rich creamy soups. My British mother makes a terrific winter soup of Leek and Potato; starchy, thick, chewy…the best after sledding.

Dan’s Savory Leek Bread Pudding Recipe makes for a terrific no-meat stuffing option with it’s eggy Brioche base and nutty cheese flavors. Also, remember it for leftovers and serve it topped with a fried egg the next morning.

You’ll love it…and if you don’t, you can use this quote from Pistol and impress your family: “By this leek, I will most horribly revenge. I eat and eat, I swear-”

Melt butter, brush bread with butter and toast in oven until golden brown; about 8-10 minutes.
Mix together eggs, yolks, half & half, thyme and seasonings. Spray large casserole dish with non-stick spray and place one layer of toasted bread in the bottom of the dish. Layer 1/3 of leeks and 1/3 of cheese onto the toast and then ladle egg mixture mixture on top to cover. Repeat the toast layer and leek/egg layer process two additional times. Cover tightly with foil and bake at 350 degrees for 45 minutes, remove foil and bake until set about another 20 minutes. 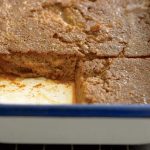 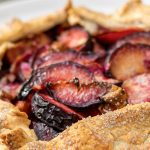